Vanessa Len on her monstrous debut YA fantasy novel, Only a Monster

"Sometimes, the only Asian characters onscreen would in the fight scenes, getting beaten up and killed by the hero"

Flipping the classic ‘monster vs. hero’ trope in an exciting and inventive way, Vanessa Len’s debut YA novel, Only a Monster, takes you to an alternate monster occupied London, on a time travelling journey filled with secrets, murder magic and more.  To celebrate its release, we chatted with Vanessa all about her monstrously magic debut and even got a sneaky insight into book two.

Hi Vanessa, we’re so excited to have you on the site today to chat about your brilliantly monstrous debut YA fantasy, Only a Monster. For readers just hearing about Only a Monster, how would you best describe it?

Thank you so much! I would describe Only a Monster as being about a monster girl whose summer is ruined when the cute guy at work turns out to be a monster slayer! It has a time-travel battle, a hidden world of monsters, and a Captain-America-like heroic antagonist. If you like Doctor Who, Buffy the Vampire Slayer, Cassandra Claire or Holly Black, you might also like Only a Monster.

I adored the way Only a Monster took the classic Monster vs. Hero trope and flipped it on its head. Can you tell us a little about the inspiration behind the story?

Thank you! Only a Monster is told from a monster girl’s point of view, and it blurs the lines between good and evil by humanising the monsters and depicting the hero as a threat.

The inspiration came from my own experience of loving big blockbuster action films as a child. They often have very clearly demarcated ‘good’ and ‘bad’ guys, but when I was growing up, there weren’t many heroes who looked like me in them. Instead, I would sometimes see myself in the ‘bad guys’. Sometimes, the only Asian characters onscreen would in the fight scenes, getting beaten up and killed by the hero.

I have a line in the book about how in movies, the camera follows the hero after the bad guys have been killed. But I know that in my own viewing experience, I can find myself aware of the few people who look like me onscreen, which sometimes means being aware of people lying dead on the ground as the camera moves away.

I thought it would be interesting to write about that feeling when a good, upright and decent hero – like the ones in the films I’d loved – is fighting against you rather than for you.

If you has the power to time travel, where would you go (future or past) and what would be the first on your list to do there?

I’m fascinated by the unknown, so I’d pack a bag for the future! And as a tourist, I love going to local supermarkets, so I might do a quick pit-stop early on to try all the new snacks!

The underground ‘Monster’ London setting was inspired! What made you decide to choose London as the base setting for the story?

I love London as a fantasy setting because it’s so big and old, and yet so vibrant and full of fresh ideas, that you can imagine all kinds of hidden worlds inside it. It’s also great for exploring diaspora experiences – and particularly great for time travel, because it has such a long and documented history. And also, I wanted an excuse to come and visit!

Each of the twelve monster families of London have a different power/skill. If you had to pick just one, which power would you choose to have, why, and how would you use it?

The Hathaway family has a special affinity with animals, and they can take their pets with them when they time travel. In the book, it’s described by a character as ‘the most useless family power in London’, but I love the idea of being able to travel with an animal friend!

Alongside Only a Monster, 2022 is set to be another great year for YA fantasy releases. Are there any you’re especially excited for or any you’ve already read and think need to be on everyone’s TBRs?

I recently read a fantastic novel called Deep in Providence, by Riss M. Nielsen. It’s about three girls who lose a friend in a car accident, and turn in their grief to dangerous magic to get her back. It’s a contemporary fantasy, rather than horror, and the character work is so deep that by the end, you feel like all of the characters are your own close friends.

Finally, the ending of Only a Monster is going to have readers screaming for book two asap. Do you have any sneaky hints you can give us to keep us going until its release?

I can give a little clue about one of the big secrets of the series! In Book 1, we learn a nursery chant that describes each of the family powers; it ends with the line ‘Only the Lius remember’. In Book 2, we find out that there’s more to that chant than we knew. The Lius have a secret version of it with an extra line at the end that describes something specific that they remember – something that all of the families once knew… 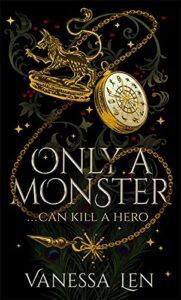 Get your copy of Only a Monster by Vanessa Len here.