Patrice Caldwell on her powerful YA anthology, A Phoenix First Must Burn

"These are the stories I’ve been waiting for since I was a teen."

Featuring sixteen stories written by bestselling and award winning authors, A Phoenix First Must Burn: Stories of Black Girl Magic, Resistance and Hope, expertly explores the nuances of the Black experience in a diverse and inclusive way.

We had the pleasure of chatting to A Phoenix First Must Burn contributor and editor, Patrice Caldwell, about how the anthology came to fruition, the process of creating it and both the complications and rewards that came with doing so.

How did the idea for A Phoenix First Must Burn come about?

Growing up, I rarely saw myself in science fiction and fantasy novels, even though that’s so much of what I read. I got the idea for A Phoenix First Must Burn one day after being reminded of Sheree R. Thomas’s Dark Matter anthology, which brought together greats like Octavia Butler, and wondering what something like this but for a young adult audience would look like but centering Black women and queer people.

The author line up for A Phoenix First Must Burn is incredible! Can you tell us a little about the process of bringing all these incredibly talented authors together to create the anthology?

I approached this as a fangirl first and foremost; I asked Black authors whose work I loved. I already knew many of these authors personally, so it was pretty easy to reach out to them. And then I spent some time reading short story magazines, like FIYAH Literary—where I found some work by Danny Lore—to bring onboard new voices! After that, I asked everyone to send me pitches of their proposed story, I gave them feedback on the pitches, and then we went from there!

What was it like seeing so many strong, black voices come together to create such an empowering anthology?

Absolutely amazing. These are the stories I’ve been waiting for since I was a teen.

I loved Letting the Right One In, your featured story in A Phoenix First Must Burn! What made you decide to write about vampires?

Thank you! I LOVE vampires. A lot of this story pulls from my own life (sadly not the vampires…that I know of, haha). I struggled with depression and anxiety growing up, and for me the vampires I often read about were these lonely creatures. I related to that a lot, the feeling of never quite being able to be yourself, of not fitting in, of constantly searching for a (metaphorical) home. I love libraries. My parents’ divorce was incredibly hard on me. And I adore a cute romance!

What were some of your biggest challenges and rewards of both editing and contributing to A Phoenix First Must Burn?

I used to be a children’s book editor—I was once when the anthology sold and throughout the editorial process—so editing the stories was the best part. I LOVED it. I got to work with authors who I was friends with, whose work I admired, and shape their stories from the ground up—for an editor, that’s a dream come true. The challenge was actually writing my own story. I wasn’t sure I could write a short story—I was revising a novel at the time and though I love short stories, I considered myself a novelist—and then as I kept reading and editing the other stories, I got nervous: what if mine wasn’t as good. That’s when I was like, Patrice just write for your younger self. After that, the story poured out of me.

Out of the sixteen stories included in A Phoenix First Must Burn, were there any that surprised you (in a good way) or authors who surprised you in what they chose to write about?

Justina Ireland’s story is HILARIOUS. I suppose I shouldn’t have been that surprised because on Twitter, on Fridays, she shares funny jokes. But it was so light and so funny and unexpected in the best way. I love it. Also, omg Karen Strong needs to write a horror novel. I had only ever read her middle grade debut, which is delightful and spooky but of a very different tone than her short story. I just loved the American southern gothic/horror vibes throughout Karen’s story. I screamed out loud at one point!

As well as being an author, you’ve also been an editor. Do you think this affects your writing and the way you approach it and if so, in what way?

I’m not an editor anymore, I left to become a literary agent. But the way in which it affects my writing is still the same: I know so much about this business, I know how unpredictable it can be, so I try to just focus on what I can control vs. things I can’t. And, what I can control is writing the best story/book that I can and then collaborating with my team on promoting it!

The stories in A Phoenix First Must Burn are wonderfully diverse in not only their plots but in sexuality, identity and the characters’ experiences as black women. Was this something that was important to you as you began the journey of assembling the anthology and if so, why?

Incredibly important. I was also thinking about Beyoncé’s Lemonade and just how revolutionary it was for me. I wasn’t a Beyoncé fan originally. I liked Destiny’s Child but felt that so much of their songs and Beyoncé’s early music while great were so centered around men. And then she did Lemonade, and I suddenly felt like I understood her. It felt like she was chronicling not just my story, but my mama’s story, and her mother’s story—especially since my family also has Texas/Alabama roots. I started having all these conversations with the women in my life that I’d never before had. I began to realize there are a lot more similarities between my mother and me, for example, than I ever thought.

This anthology was originally pitched as Lemonade meets Octavia Butler for a young adult audience. That’s very true. I wanted all of the stories, though completely standing alone, to be in conversation with each other—to weave a narrative of what it means to be a Black woman, of what it means to be Black and queer, of the many intersections within the Black community, of the fact that we’re not a monolithic culture but there are a lot of overlapping experiences. I was the most intentional about this in the editorial process. I was constantly asking contributors, what are you really trying to say? I was constantly pushing them to be as honest as they could. I think that’s why the stories are so incredibly powerful. This is absolutely an anthology that has something for everyone, but from the early reads and reviews thus far, I’ve noticed that when Black people read this book, they get something quite different from it and I love that.

What’s one story featured in A Phoenix First Must Burn you wish a younger Patrice Caldwell could have read?

Was there a specific story you had the most fun editing or one you found the most challenging?

I’ve never edited anything in second person tense (“you”) before, so while it wasn’t necessarily a challenge, I LOVED editing Charlotte Nicole Davis’s story. It was just so different from anything I was used to.

If you could put a copy of A Phoenix First Must Burn into the hands of one reader, who would it be and why?

I am the oldest of five and two of my sisters are actually the target age for this anthology, so I’d definitely be curious to hear their thoughts, haha. But my mother is the person I most want to give it to. She gave me my love for science fiction and fantasy. We didn’t really understand each other as I was growing up, and she wasn’t thrilled when I started working in publish and writing (she wanted me to have a much more stable career). But as I’ve gotten older, I’ve grown to understand her a lot better and we are much closer. This is actually cheating a bit, though, because I did give her a copy, thinking that she wouldn’t read it (she’s not much of a reader) and then she came to visit me and had the book in the back seat of her car, and told me about some of the stories and told me about the stories she’d read thus far and that she was proud of me. I will never forget that moment.

What is one message you hope readers will take away with them upon reading A Phoenix First Must Burn?

Hope. That was one of the few directives I gave the contributors. I asked them to make sure all stories ended on a note of hope as growing up, there were many days when I wasn’t sure I’d make it. Constantly reading stories where Black people were suffering or where we didn’t exist at all, reinforced that I just didn’t belong here.

All of these stories, no matter how heavy, end in hope. I want readers leave the anthology knowing that no matter how bleak it seems, no matter how much you want to call it quits and give up, there is always hope and you will make it through <3

Get your copy of A Phoenix First Must Burn edited by Patrice Caldwell in the UK & US. 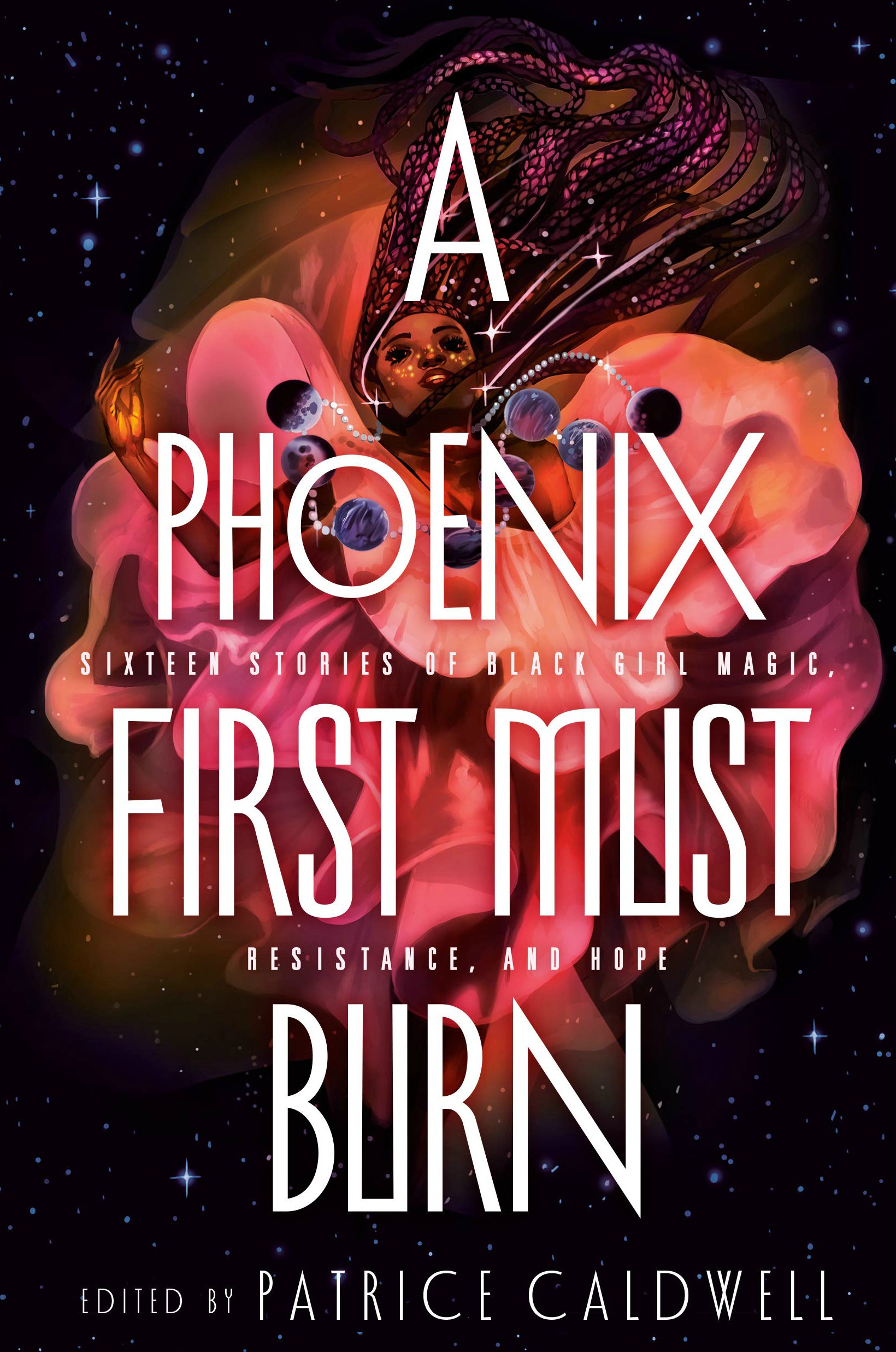