Margaret Rogerson on her thrilling new YA fantasy, Vespertine

When I started pitching my newest book Vespertine as “Venom meets Joan of Arc,” I expected my publisher’s response to be something along the lines of “please, Margaret, stop that,” but to my delight, they embraced it and it’s stuck. And it really is a perfect way to describe this book: Vespertine is about a young woman named Artemisia who is training to be a nun in a world where the deceased must be cleansed by rites, or else they’ll rise as restless spirits with a hunger for the living. When her convent is attacked, she descends to her chapel’s crypt to awaken an ancient, legendary spirit bound to a saint’s relic and wields its power to battle the undead. Over the course of the book, Artemisia and the spirit slowly progress from bitter enemies struggling for control over her body, to reluctant allies, to devoted friends—even soulmates. When my publisher isn’t looking, I expand Vespertine’s pitch to “Venom meets Joan of Arc meets Dark Souls.”

The spirit, called the revenant, is one of the book’s two main characters. Its scathing commentary is responsible for a lion’s share of the dialogue, but it never actually appears on page. I’ve always loved stories in which two characters share the same body (which isn’t as rare of a trope as it seems; the Penric and Desdemona novellas by Lois McMaster Bujold are particular favorites) so I blithely imagined that when it came to writing my own version, the task would come easily to me. Well, it didn’t. I only realized after I started how much I rely on body language to convey character and physical presence to move scenes forward, unexpectedly resulting in one of the biggest challenges of my writing career. How do you write a main character who can’t even touch anything, unless it borrows somebody else’s body to do it?

Unsurprisingly, that question ended up being key. If the revenant wanted to do anything at all, it had to take over Artemisia’s as its vessel, and there were only two ways it could accomplish that: by force, or with Artemisia’s permission—a difficult prospect given her past trauma of being possessed by a violent spirit as a child. Likewise, she faces a similar choice when it comes to channeling the revenant’s power—a significant vulnerability of its own, as the revenant’s abilities have been wielded against its will by clerics for centuries. Both extremes offer up intriguing possibilities as their relationship progresses from suspicion to mutual trust. In the interest of not spoiling the entire plot, I have to leave at that, but working through Vespertine’s challenges certainly left me feeling that two characters sharing a body might be better than one. 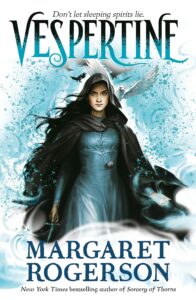 Get your copy of Vespertine by Margaret Rogerson here.