"Stories have power, and as a reader, whenever I am able to see myself in a narrative and relate to a character, that has always been so rewarding to me."

With a tantalisingly dark reimagining of the Evil Queen and Snow White to her name, there’s no doubt about it, Julie C. Dao knows how to weave the perfect story and, filled with magic, intrigue and love of all kinds, her newest YA standalone fantasy, Song of the Crimson Flower, is no exception.

Alternating perspectives between Lan, a wealthy nobleman’s daughter and Bao, the poor physician’s apprentice who loves her, Song of the Crimson Flower follows their journey across the continent in the hopes of freeing Bao’s soul from the flute he’s been cursed to by an evil witch… a spell only true love can break. The only problem is, after been cruelly rejected by Lan, Bao now despises her.

We spoke to Julie all about Song of the Crimson Flower, what she loves about writing complex female characters and her must-read YA books for fans of her work.

For those who aren’t familiar with the plot of your newest novel, Song of the Crimson Flower, what is one thing you’d like them to know going into it?

I would want them to know that it’s a standalone romantic fantasy based on a Vietnamese folktale!

Song of the Crimson Flower has a beautiful, classic fairy-tale feel to it. What was your biggest inspiration behind the story?

Oh, thank you! I was inspired by a folktale my mother told me, which gave me the idea for a complex love story about two very different, flawed people who have to fall apart before they come together! The book is also a tribute to my family and my heritage.

I am proud of all of my books, but SONG OF THE CRIMSON FLOWER is a special one to me. People always say the second book in a contract is the hardest to write, but I found that this third book of mine — though fully formed in my mind — was the most stubborn to translate to paper. It was more than worth it, though. ⠀⠀⠀⠀⠀⠀⠀⠀⠀ I love this love story and I’m proud to have written a Vietnamese fantasy (that, so far, has earned rave reviews from my extremely biased family). I even feel beautiful and confident just holding it! ⠀⠀⠀⠀⠀⠀⠀⠀⠀ It was also named a Junior Library Guild Selection for Fall 2019! I’m honored and grateful, and I’m looking forward to sharing it with you all when it hits shelves on November 5. ⠀⠀⠀⠀⠀⠀⠀⠀⠀ #forestofathousandlanterns #kingdomoftheblazingphoenix #songofthecrimsonflower #riseoftheempress #authorsofinstagram #readersofinstagram #writersofinstagram #portraitmode #luckywriter #dreamscometrue #juniorlibraryguild #bookstagram #youngadult #yafantasy #yalit #diversebooks

In the book, Bao, one of the protagonists, is cursed by an evil witch, who traps his soul inside a flute. How did you come up with the curse and was this your first idea or did you go through multiple curses before landing on this one?

In the original Vietnamese folktale, there is a fisherman whose spirit is entrapped in a similar way. I wanted to use that as the basis for Bao’s curse, which links him to the object he loves most in the world. That was the original concept when I first started writing SONG, and I’m happy to say it stayed through completion!

From magic and romance to family and war, Song of the Crimson Flower has it all but was there a specific aspect you most enjoyed to write and explore?

The romance between Lan and Bao was definitely one of the more challenging aspects, and I love to try and expand my comfort zone when it comes to craft. I also enjoyed writing Vy, who is the “villain” in this narrative. One of my favorite elements of writing is exploring characters’ choices and trying to deepen the conversation between “Who is good?” and “Who is bad?” and what that necessarily means. I love complex female characters!

Mental illness is something rarely seen in fantasy, especially in male characters, which is why it was so refreshing to see anxiety being represented in Bao’s panic attacks. What made you decide to insert a very real issue like anxiety into a fantasy setting?

Stories have power, and as a reader, whenever I am able to see myself in a narrative and relate to a character, that has always been so rewarding to me. Bao and I both have anxiety that is sometimes very intense, and I loved being able to write what that feels like.

SONG OF THE CRIMSON FLOWER comes out one month from today! I have only three signed ARCs to give out, and this is open internationally until October 23. ⠀⠀⠀⠀⠀⠀⠀⠀ Link to enter is in my bio! ⠀⠀⠀⠀⠀⠀⠀⠀ #forestofathousandlanterns #kingdomoftheblazingphoenix #songofthecrimsonflower #riseoftheempress #authorsofinstagram #readersofinstagram #writersofinstagram #bookstagram #youngadult #yafantasy #yalit #diversebooks #advancereaderscopy #bookgiveaway

The Rise of the Empress duology and Song of the Crimson Flower have all been set in the same universe. What was it like returning to this world but following a new cast of characters with their own story, separate from that of the original duology?

I love this world and it was a lot of fun returning to it. It felt like walking down a street I already knew well and finding this whole new corner to explore. It was comforting and exciting all at once because I’ve never really written a series before!

Your books always feature such powerful and equally brilliant heroes and villains but do you have a favourite type of character to write?

That is such a kind thing to say; thank you! I love characters who have plenty of room to grow. You will be hard-pressed to find a “perfect” character in my book who has no flaws and who immediately knows who they are and what they want – that’s not realistic in life or in fiction! I especially enjoy writing female characters who showcase quiet strength and have the fortitude to find their place in the world.

Do you have any YA book recommendations for fans of the Rise of the Empress duology and Song of the Crimson Flower?

You cannot go wrong with a Cindy Pon book! I loved her Chinese fantasies SERPENTINE and SILVER PHOENIX. I also really enjoyed Mimi Yu’s THE GIRL KING, which features a strong, fierce young heroine, and Kat Cho’s contemporary Korean fantasy WICKED FOX, which I highly recommend for fans of antiheroes (one of the main characters is a mythical nine-tailed fox who eats the souls of men!). If you are a fantasy fan who wants to branch into sci-fi with vivid imagery, rich settings, and phenomenal characterization, definitely check out Axie Oh’s REBEL SEOUL and its sequel, ROGUE HEART.

After a month and a half of adulting, I am thrilled to be writing again in my newly renovated office space! I’m going to hit “send” on something today and I’m over the moon about it! So much to be thankful for this year!⠀ ⠀ #forestofathousandlanterns #kingdomoftheblazingphoenix #songofthecrimsonflower #riseoftheempress #authorsofinstagram #readersofinstagram #writersofinstagram #bookstagram #youngadult #yafantasy #yalit #diversebooks #officegoals #homelibrary #dreamscometrue

Song of the Crimson Flower is your third book set in the Rise of the Empress universe, can readers get their hopes up for another opportunity to explore the world further in future books?

Well, never say “never,” but for the foreseeable future, I am ready to move on from Feng Lu. I love this world, but there are many other stories I have been longing to write! I think I’d love to switch gears for a bit, but who knows? Maybe someday, I will go back.

Finally, if a river witch were to curse your soul to an inanimate object, which object would you choose?

I would probably be trapped inside either my computer or my phone… I spend too much time on them!!! 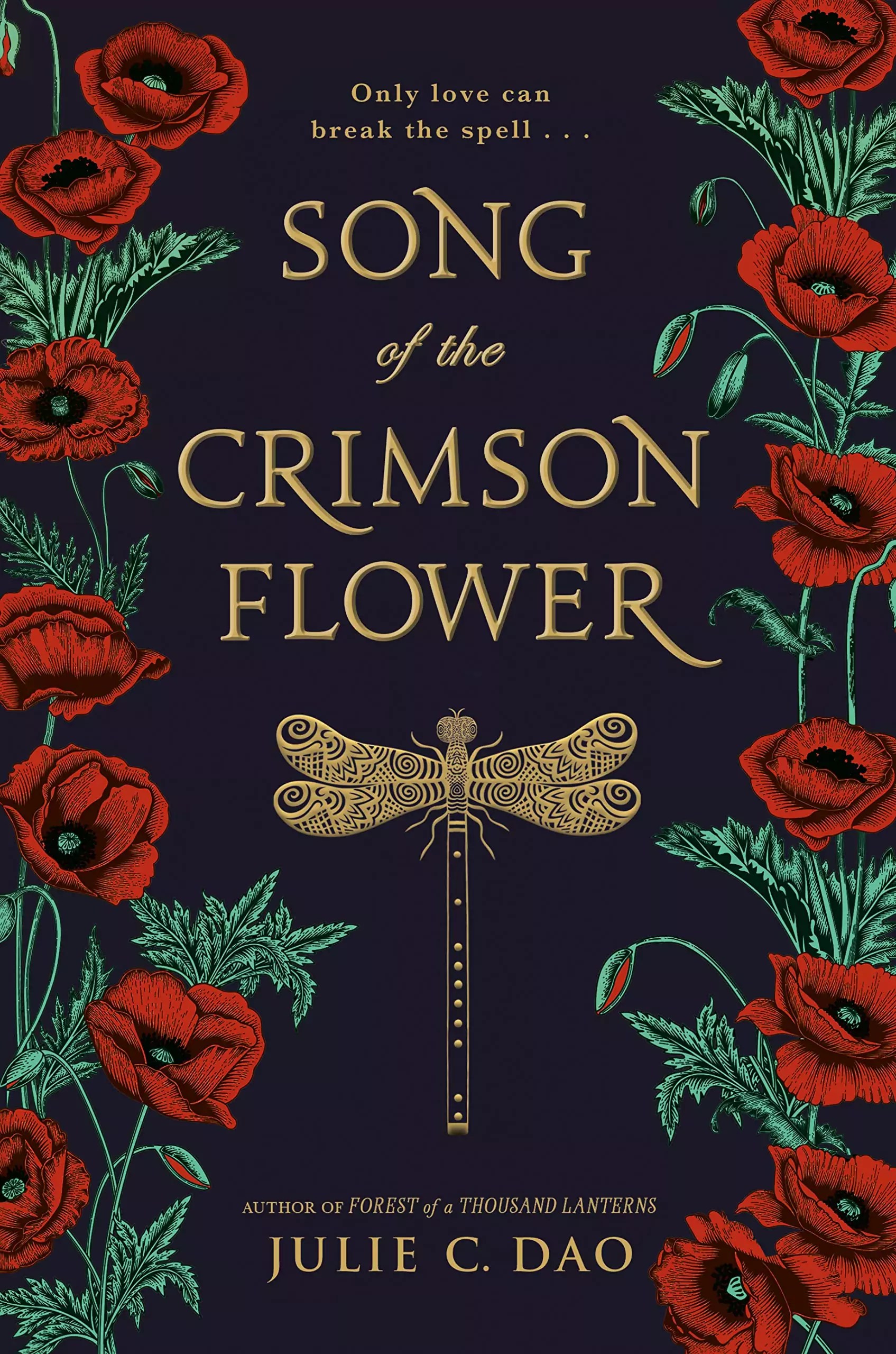 Song of the Crimson Flower by Julie C. Dao is available to buy now in the UK and US.

Your Christmas movie opinions will decide your perfect holiday read