"as dead as history seems to many of us, there are ways it continues to affect our very lives today"

This post was written by Vincent Tirado, author of Burn Down, Rise Up

Lately, I’ve become a huge fan of Our Flag Means Death. It’s an amazing historical comedy about the adventures of one Stede Bonnet, an aristocrat who abandons his life of comfort and leisure to become a pirate. Donning the name ‘The Gentleman Pirate,’ he sets out with his own crew to carve a reputation for himself—the kind of reputation that ends up leaving some baffled and others in awe. Along the journey, Stede meets the infamous Blackbeard, and somehow, they hit it off quite well! In fact, it becomes obvious that while Blackbeard envies Stede’s elegant lifestyle, Stede envies Blackbeard’s command of the ocean, and they both take turns teaching each other their ways. The whole season is full of hijinks that weave historical facts into the fiction.

Now, I have never cared for history. Even as a kid, I couldn’t keep the names and dates straight in my head during school. I somehow managed to sneak my way into AP History and did very well, but if you asked me to recount a single lesson, I’d come up empty. I think it’s because much of history feels so dead, so confined to the past. Irrelevant. And therefore unimportant. The facts are stale crackers and I’d rather fill myself with a charcuterie board of trivia about my favorite fictional characters. However, when I was watching Our Flag Means Death, I was surprised by how enriching it was when my partner would point out “Oh, that’s actually true. Blackbeard really did that.”

I hesitate to call early 18th century pirating ‘irrelevant history’ because I don’t know who might be genuinely interested in it or have been affected by whatever butterfly effect Blackbeard might have had across the West Indies where he operated. What I mean by ‘irrelevant’ is that it is very much separated from how I currently live my life. To be a little more blunt, you have to ask yourself–will a kid in Iowa connect as strongly to the Netflix’s The Get Down, as a kid who was raised in the Bronx? Perhaps not.

But pop culture has a way of resurrecting historical figures and making them relevant once more. See also: Hulu’s The Great, a comedy drama about Catherine the Great’s rise to power. Not only was I thoroughly entertained by the character development, but it was an interesting learning experience. I know not every detail is accurate to that time period, but it piques my interest enough to read up about her and the time period. Through pop culture, history becomes relevant, interesting and even fun. But most of all, it becomes important to us–as it should be. After all, as dead as history seems to many of us, there are ways it continues to affect our very lives today. We just have to pay attention. 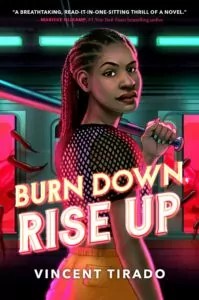 Get your copy of Burn Down, Rise Up by Vincent Tirado here.