Megan Whalen Turner rates all the covers of her timeless novel, The Thief

'[N]othing warms my heart like seeing someone online say something like, “I’ve read this book five times a year for thirteen years and I only just now got this reference on page X.”'

Many of us grew up reading and loving The Queen’s Thief . For those of us who love collecting different versions — good news! Hodder is publishing a new paperback edition of this series. And for those who have never read this series, buckle up because you’re in for an exciting ride.

Eugenides, can steal anything – or so he says. Then his boasting lands him in the king’s prison, and his chances of escape look slim. So when the king’s magus invites him on a seemingly impossible quest to steal a legendary object and win back his freedom, Gen in no position to refuse. The magus has plans for his king and his country. Gen has plans of his own . . .

To celebrate the new wave of readers who are about to get sucked into this universe, we chatted with Megan Whalen Turner on why The Thief is so timeless.

So glad that the Queen’s Thief series is getting this gorgeous UK edition! Let’s start off with a fun question: Tell us what you like the most about each cover.

I love this cover. I’d asked Greenwillow not to put the face of the main character on the book because I wanted to leave his appearance up to the reader’s imagination and I thought this image was perfect—an inscrutable goddess, sort of otherworldly and monumental. Tragically, I later learned from librarians that in spite of the fact that this is obviously the Great Goddess Hephestia, people mistakenly assumed it was a picture of Gen, just a really bad one, or worse, they thought it was Jesus. This would have been a great cover if I’d written a book about Jesus, but I didn’t, so as covers go, maybe not a success. I love it anyway.

Okay, no one could be misled by this cover. You’ve got godlike statues and an obvious ne’er-do-well right there in the foreground. Even though it’s the most revealing of the covers, I like that it is still not telling you too much.

Harper UK
This cover was a first for me–the first time I felt that an artist had taken words that I’d written and made an illustration from them. It’s an amazing feeling. The little lamp! The pry bar! The creepy wet floor of the cave with the bones all around. They are all there in San Val’s picture. Vince Natale Cover
This is where I confess that beauty is more important to me than accuracy. Hamiathes’s Gift was never meant to be the size of a yo-yo, but I don’t care, I don’t care even a little bit. All of Vince Natale’s covers are gorgeous and perfect. The books were recovered in 2017 just before Thick As Thieves came out. What I like about Joel Tippie’s covers is that they manage to be different from Natale’s work but don’t fight with it. What I love is the precision of Tippie’s work — I almost expect that when the clock strikes the hour the little figures on the cover will trundle back and forth. 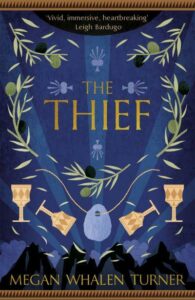 Hodder had such a hard act to follow, and I’m amazed again that there can be a whole new way to make the book beautiful. I love the colours. I love that ray pattern. I love the rough texture of Hamiathes’s Gift. I especially love the mountains across the bottom— they ground the cover much the way they ground my story. There’s one more thing I love, but that will be revealed over time, and I’ll leave the readers to see it for themselves.

How does it feel to see a new wave of readers enjoying your books for the first time?

I grew up reading books from the library, so my reading was very intergenerational. I think that’s important —that books can connect one generation to the next and the next. I never dreamed that mine would be one of those books, though. It’s an incredible feeling.

What do you think makes this series so timeless?

The subjects that interested me — women wielding political power, the turning point in a society where people still worship but don’t really believe in their gods — the origins of war—they weren’t exactly trending at the time, but if they weren’t trendy, they were, unfortunately, always relevant.

The series is adored by many who grew up reading The Thief and I’m sure they would be rereading them. What do you think would be the biggest difference in their reading experience this time compared to the first time reading it around 20 years ago, in terms of the characters, and lessons learnt?

I don’t know about characters or lessons learned, but nothing warms my heart like seeing someone online say something like, “I’ve read this book five times a year for thirteen years and I only just now got this reference on page X.” I want my readers to read my book more than once. I want them to see something new each time. I am delighted whenever the internet lets me know that has happened.

Throughout The Thief, there are various short stories about the gods, goddesses and other mythological figures existing in the Queen’s Thief universe. Is there any difference between writing these and writing the main storyline? Which one do you enjoy more?

Those little inset stories were so much harder than anything else in the book to get right. In early drafts, I just put in a note in hard brackets where I thought a story needed to be and kept going. It was only after I’d written multiple drafts that I began to get a glimmer of what the inset story might be and how it would support the larger narrative. And the whole time I was writing there was this terrifying black hole in the middle of the manuscript labelled [insert story here.]

The cast of characters – a thief, the magus, his two apprentices and a soldier – is so well thought out! We got to learn so much about the backstory and history based on their conversations around campfires and throughout their long journey. How did you come up with this set up?

I’ve said (often) that I tried very hard in The Thief to describe a world that didn’t look like Middle Earth. Tolkien had dominated the fantasy landscape for decades and I’d seen so many books published with wizards and elves and hobbits that weren’t called hobbits and things just like orcs only with different names. I wanted my world to be different and when I visited Greece, I found just the inspiration I needed . . . to start writing my story about a group on a quest involving a magical knickknack because evidently, you can distance your work from some of your influences some of the time, but you’ll never cut yourself off from all of them, all at once.

Any updates on the adaptation? Can you talk about it?

I don’t think I am free to say much at this point except that I hear wonderfully positive things from Jim Whitaker, the producer working with Disney, and I feel that The Thief is in very good hands. A film is a whole journey and so far, I am enjoying every step.

Get your copy of The Thief here.