"Teaching teens changed my life because it taught me to love and respect them, and to open my heart to be loved back."

Get ready to meet your new favourite YA author, Gabriela Martins, as you fall in love with her gorgeous debut YA rom-com, Like a Love Song. Following a Latina teen pop star after she’s set up with a fake boyfriend to ‘fix’ her image after a messy, very public breakup, Like a Love Song has everything you could want in a rom-com. It’s fun, swoon-worthy, uplifting and unafraid to call out Hollywood on its double standards and dangerous pressures.

To celebrate its release, we had the chance to chat to Gabriela all about her fabulous debut, upcoming projects and what it means to finally see Brazilian representation in YA.

Gabriela! I’m so excited to get to chat to you today about your wonderful new YA novel, Like a Love Song. For those who may not yet be familiar with its premise, how would you describe it to them using just three words?

Thank you so much for the chance of being here! I love United by Pop, so I’m super happy to be doing this interview! Three words: viral, identity(-crisis), learning.

Where and when did the inspiration for Like a Love Song hit? Is it any different from what you originally imagined it would be?

Inspiration struck for this book in early July 2019. I had just asked for sick leave at work because I was deeply depressed. Couldn’t-even-get-out-of-bed depressed. It-was-so-bad-I-didn’t-even-go-to-the-bathroom-and-my-bladder-hurt-all-the-time depressed. I kept trying to write new books, too, but nothing was making sense for me. Then in a “haha jk… unless?” moment, I mentioned to a friend, “what if I wrote a romcom?”. I had been querying for ten years at this point, all dark books ranging from thrillers to contemporary fantasy, all with strong romantic subplots but always exploring the darkness aspects of human nature.

Thing is, my whole life looked pretty grim at that point. I needed some form of outlet to receive some light, some positivity. I’ve always loved fake dating and was very invested in fan culture, so these choices came more or less naturally to me… and going back to my first draft felt like a hug every time. Along with therapy and the right meds, it took me from a very bad place and made me happy to start again (everything).

From the first draft, it mostly stayed the same! I polished it a bit for querying, then edited for five months with my agent to iron out details, and had only one edit round with my editor. I’ve been lucky enough to work with people who got exactly what the story was about, and only guided me in ways to make that shine even brighter!

Both Like a Love Song and your 2022 title, Bad at Love, feature Brazilian protagonists, which is something (sadly) rarely seen in YA. I can imagine it feels pretty cool knowing your books might be some of the first that Brazilian teen readers see themselves in?

It is cool, but it’s also really weird in a way. I want to celebrate my culture and my identity, but it’s so otherworldly that before 2018 with Laura Pohl’s sci-fi “The Last 8”, there were no Brazilian-authored YA books in mainstream publishing at all. After her came Lucas Rocha and Vitor Martins with their translations of YA books originally published in Brazil, and finally, me. The fact that as of now we can’t even fill one hand is especially surreal when you consider the estimate of Brazilian and Brazilian-Americans in the United States is of 500,000 people. It’s bittersweet. I am immensely grateful and happy that my publisher is putting money towards filling that void, but the fact that we’ve gone so long without a single Brazilian-authored book, and that even now, this number continues so low, is staggering. I hope that in the next years I can make guest posts with titles like, “My 10 favorite Brazilian romcoms” (right now, only my book is a YA romcom), or “Getting to know all Brazilian states through the books set there”.

Not only did I adore Like a Love Song’s cast of characters for their personalities, but it was also so exciting to see the wide range of identities they represented. Is this something you’re hoping to continue writing throughout your future books?

Thank you so much! I tried to reflect some of my experience, and so this is something I hope to continue to explore. One of my childhood best friends in the book is Pakistani from Sindh, so that’s where Padma sort of came from. My dad’s Jewish, so I wanted William to be Jewish as well. As for their sexual orientations, I’m a queer person. We walk in packs. I joke with my friends that Nat is my token straight character, but it was important to me that she was straight. With that, I wanted to poke fun at some Brazilian conservative ideologies that claim that “queer is contagious”. Um, no. If aggressively allocishet media didn’t make me hetero, having queer friends isn’t going to change your sexual orientation either. At most it can give you courage to accept who you truly are.

If Like a Love Song were to be made into a movie (because, I mean, it practically oozes Netflix rom-com material..) do you have a dream casting for any of the characters?

Listen, that would be a dream come true. I mean, another dream come true! I’ve been very fortunate with all this dream-come-true business, but that’d be a super awesome experience. Authors usually aren’t super involved in casting decisions, but I would love to have an actual Brazilian or Brazilian-American actress play Nati, all the better if she could be age-appropriate. There aren’t many teen BrAm populating the screens right now, so I would love the hypothetical movie to launch a new talent. Wouldn’t be upset at all if she became the new Noah Centineo and started starring in a bunch of new romcoms as well!

You mention in your author bio that along with being an author, you’ve also worked as a high school teacher. Do you think this helped you when it came to writing from the perspective of a teen or affected how you wrote Nati’s story in any way?

Teaching teens changed my life because it taught me to love and respect them, and to open my heart to be loved back. The love I have received throughout these ten years (and that I still receive, even though I’m now a full-time writer) has healed me from the worst years of my life, with the only demand that I unconditionally love them all back. And so I do.

There are little pieces of my students in all of my characters and worlds, including Nati, including Like a Love Song. I am fortunate enough that these kids have confided me and loved me in such a way that it would be impossible for my work to not be directly affected by them, today and always.

Like a Love Song features some of my all time favourite tropes (hello fake-dating and ‘there’s only one bed’) but are there any tropes you wanted to use but didn’t or are hoping to feature in future books?

Mmmkay so I’m going to use this as an opportunity to talk about book 2, which I’m doing the big round of revisions right now for, and I’m super into. Book 2 has got fake bad boy who’s secretly a timid soft boy, fierce teenage journalist hell-bent on exposing his dirt for a scholarship opportunity, a bet that can ruin everything, estranged friends trying to make it work because of awkward situations, and 3x more music. (Oh, plus a horribly tragic unintentionally tourist-y date.)

Finally, if you were to reach Nati’s level of fame and stardom, what would you like it do be for (you can go as wild as you want to, we’re talking big ‘I want to be a operatic astronaut’ dreams here.

I would never want to be as famous as Nati, that sounds like a nightmare for someone who values privacy as much as me. Plus, I can only deal with 1 hater every three months. I will say that I want and hope for recognition and plural forms of success, but stardom scares the hell out of me. Maybe that’s why I’m so into writing these books.

A few years ago, my stepmom used to be neighbors with a lead singer from a popular Brazilian rock band, and we met up with a group of friends in common a few times. Not close enough to be friends all (my most famous friend is Adiba Jaigirdar), but once we were skateboarding/pretending to be able to skateboard, and an intense amount of people broke into the condominium because they’d heard or seen pics of him hanging out, out in the open. He literally hid behind a bush. I can’t be hiding behind bushes. It will ruin my hair, and I value my hair very much. :p 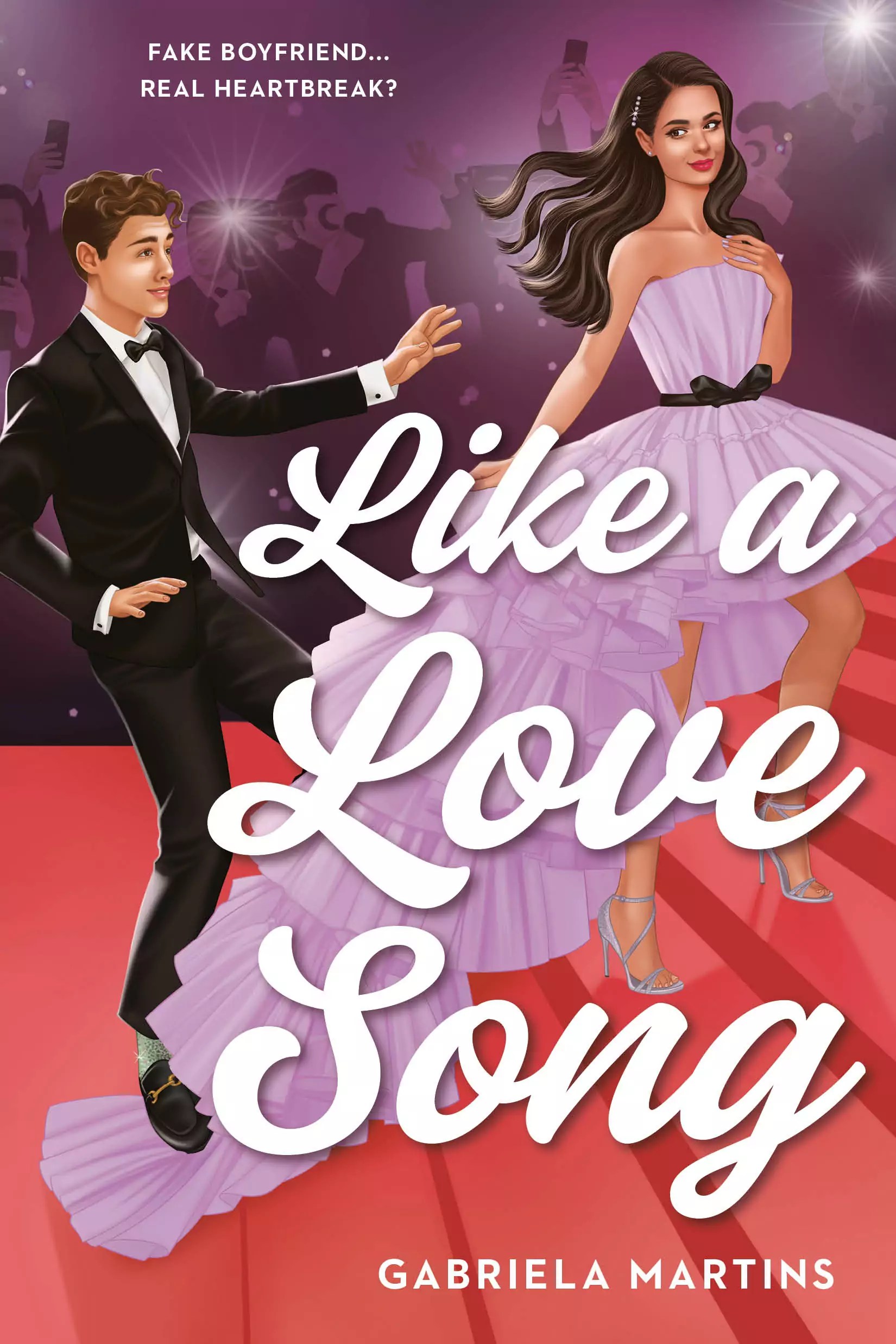 Get your copy of Like a Love Song by Gabriela Martins here.

WIN 1 of 4 copies of powerful new YA non-fiction collection, Allies