David Valdes on his queer time travelling YA debut, Spin Me Right Round

"I would have killed for a kid like me in a book growing up."

Following modern day gay teen, Luis Gonzalez, after he finds himself having travelled back in time to his parents’ era to save a closeted classmates life, David Valdes’ debut YA novel, Spin Me Right Round, is a witty and imaginative story readers will quickly find themselves hooked on. To celebrate its UK release, we had the pleasure of chatting to David Valdes about all things time travel, the importance of representation and more.

Fun, gay, intersectional, 80’s, and time travel (which is two words, technically, but I need both!)

Can you tell us a little about the inspiration behind the book?

My daughter and I were watching Stranger Things 3 together and she was really drawn to the 80’s aesthetic, from the clothes to the mall (which she thought looked more fun than malls today). I was like, hey, I know the 80s! As soon as I realized how fun it would be to write about that time, I knew I wanted to do a gay riff on Back to the Future – and the book wrote itself.

Spin Me Right Round explores different era’s attitudes towards the LGBTQIA+ community and the things that have changed and those that still haven’t. I can imagine that must have been a somewhat bittersweet element of the book to write?

Absolutely. My queer students today are so far ahead of where kids were when I was their age, both in what they know and what they expect. But they also don’t seem to understand very well what it cost to get to us to this point. I want readers to both celebrate the joy that is possible but also recognize that the road was rough before it was paved for them.

It’s the point! I would have killed for a kid like me in a book growing up. I would have loved to see a Cuban character who wasn’t in Scarface and a gay character with a happy ending.

If you could travel to any time period, past or future, where would you choose to go and why?

I met my birth father once in 1979 but didn’t know he was my dad at the time. I’d love to pop into that day and watch the interaction from the outside knowing what I know now.

Finally, if teen David Valdes were to move forward in time and get a hold of a copy of Spin Me Right Round, how do you think he’d react?

He would love it. LOVE IT. Young me was a huge time travel fan and, as I mentioned before there were no books about kids like me, so this would be complete wish fulfilment for younger me. Of course, he would also instinctively look for a place to hide it in a hole in his mattress because in his time all hell would break loose if he was caught with it. 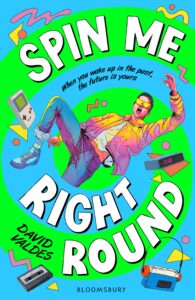 Get your copy of Spin Me Right Round by David Valedes here.

“I like books which grab you on page one and don’t let you go – and that those are the kind of stories I try to write!” Sophie McKenzie on Truth or Dare