Whether you prefer your Paramore rock or pop: we've got a book recommendation for you!

After 16 years, 5 studio albums, and many singles in between: Paramore have gifted us with a wide range of music and sounds over the years. From sad to joyful, hopeful to vengeful, sarcastic to honest; there’s a song for every mood. And what else is there for every mood? A book!

Based on lyrics, sound, and vibe, I’ve selected 10 Paramore tunes that compliment these 10 YA titles. Happy reading! 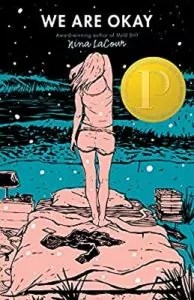 We Are Okay by Nina LaCour

You go through life thinking there’s so much you need…

Until you leave with only your phone, your wallet, and a picture of your mother.

Marin hasn’t spoken to anyone from her old life since the day she left everything behind. No one knows the truth about those final weeks. Not even her best friend, Mabel. But even thousands of miles away from the California coast, at college in New York, Marin still feels the pull of the life and tragedy she’s tried to outrun. Now, months later, alone in an emptied dorm for winter break, Marin waits. Mabel is coming to visit, and Marin will be forced to face everything that’s been left unsaid and finally confront the loneliness that has made a home in her heart. 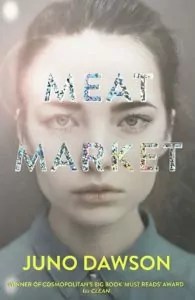 “It’s all about the exposure, the lens I told her
The angles were all wrong now
She’s ripping wings off of butterflies”

Jana Novak’s history sounds like a classic model cliché: tall and gangly, she’s uncomfortable with her androgynous looks until she’s unexpectedly scouted and catapulted to superstardom.

But the fashion industry is as grimy as it is glamorous. And there are unexpected predators at every turn.

Jana is an ordinary girl from a south London estate, lifted to unimaginable heights. But the further you rise, the more devastating your fall …

Honest and raw, this is a timely exposé of the dark underbelly of the fashion industry in an era of #TimesUp and #MeToo. It might just be Juno Dawson’s most important book yet. 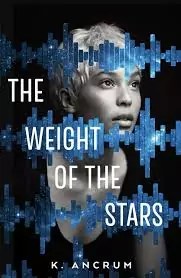 The Weight of the Stars by K Ancrum

Ryann Bird dreams of traveling across the stars. But a career in space isn’t an option for a girl who lives in a trailer park on the wrong side of town. So Ryann becomes her circumstances and settles for acting out and skipping school to hang out with her delinquent friends.

One day she meets Alexandria: a furious loner who spurns Ryann’s offer of friendship. After a horrific accident leaves Alexandria with a broken arm, the two misfits are brought together despite themselves—and Ryann learns her secret: Alexandria’s mother is an astronaut who volunteered for a one-way trip to the edge of the solar system.

Every night without fail, Alexandria waits to catch radio signals from her mother. And its up to Ryann to lift her onto the roof day after day until the silence between them grows into friendship, and eventually something more . . .

In K. Ancrum’s signature poetic style, this slow-burn romance will have you savoring every page. 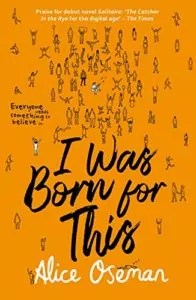 I was Born for This by Alice Oseman

“Just blame the limelight
Don’t look up, just let them think
There’s no place else you’d rather be”

For Angel Rahimi, life is only about one thing: The Ark – a pop-rock trio of teenage boys who are currently taking the world by storm. Being part of The Ark’s fandom has given her everything – her friendships, her dreams, her place in the world.

Jimmy Kaga-Ricci owes everything to The Ark too. He’s their frontman – and playing in a band is all he’s ever dreamed of doing. It’s just a shame that recently everything in his life seems to have turned into a bit of a nightmare.

Because that’s the problem with dreaming – eventually, inevitably, real life arrives with a wake-up call. And when Angel and Jimmy are unexpectedly thrust together, they will discover just how strange and surprising facing up to reality can be. 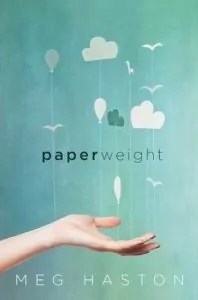 Seventeen-year-old Stevie is trapped. In her life. In her body. And now in an eating-disorder treatment center on the dusty outskirts of the New Mexico desert.

Life in the center is regimented and intrusive, a nightmare come true. Nurses and therapists watch Stevie at meal time, accompany her to the bathroom, and challenge her to eat the foods she’s worked so hard to avoid.

Paperweight follows seventeen-year-old Stevie’s journey as she struggles not only with a life-threatening eating disorder, but with the question of whether she can ever find absolution for the mistakes of her past…and whether she truly deserves to. 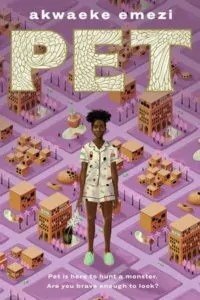 Pet is here to hunt a monster.
Are you brave enough to look?

There are no more monsters anymore, or so the children in the city of Lucille are taught. With doting parents and a best friend named Redemption, Jam has grown up with this lesson all her life. But when she meets Pet, a creature made of horns and colours and claws, who emerges from one of her mother’s paintings and a drop of Jam’s blood, she must reconsider what she’s been told. Pet has come to hunt a monster, and the shadow of something grim lurks in Redemption’s house. Jam must fight not only to protect her best friend, but also to uncover the truth, and the answer to the question — How do you save the world from monsters if no one will admit they exist?

In their riveting and timely young adult debut, acclaimed novelist Akwaeke Emezi asks difficult questions about what choices a young person can make when the adults around them are in denial. 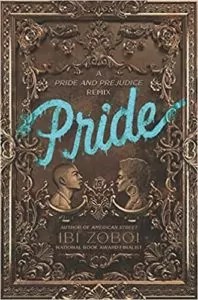 “See it’s easy to ignore trouble, when you’re living in a bubble
So what are you gonna do, when the world don’t orbit around you?”

Zuri Benitez has pride. Brooklyn pride, family pride, and pride in her Afro-Latino roots. But pride might not be enough to save her rapidly gentrifying neighborhood from becoming unrecognizable.

When the wealthy Darcy family moves in across the street, Zuri wants nothing to do with their two teenage sons, even as her older sister, Janae, starts to fall for the charming Ainsley. She especially can’t stand the judgmental and arrogant Darius. Yet as Zuri and Darius are forced to find common ground, their initial dislike shifts into an unexpected understanding.

But with four wild sisters pulling her in different directions, cute boy Warren vying for her attention, and college applications hovering on the horizon, Zuri fights to find her place in Bushwick’s changing landscape, or lose it all.

In a timely update of Jane Austen’s Pride and Prejudice, critically acclaimed author Ibi Zoboi skillfully balances cultural identity, class, and gentrification against the heady magic of first love in her vibrant reimagining of this beloved classic. 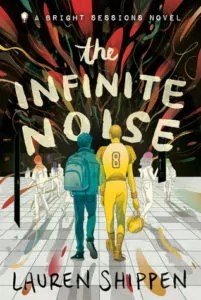 The Infinite Noise by Lauren Shippen

“Rose-colored boy
I hear you making all that noise about the world you want to see
And oh, I’m so annoyed, ‘cause I just killed off what was left of the optimist in me”

Caleb Michaels is a sixteen-year-old champion running back. Other than that his life is pretty normal. But when Caleb starts experiencing mood swings that are out of the ordinary for even a teenager, his life moves beyond “typical.”

Caleb is an Atypical, an individual with enhanced abilities. Which sounds pretty cool except Caleb’s ability is extreme empathy—he feels the emotions of everyone around him. Being an empath in high school would be hard enough, but Caleb’s life becomes even more complicated when he keeps getting pulled into the emotional orbit of one of his classmates, Adam. Adam’s feelings are big and all-consuming, but they fit together with Caleb’s feelings in a way that he can’t quite understand.

Caleb’s therapist, Dr. Bright, encourages Caleb to explore this connection by befriending Adam. As he and Adam grow closer, Caleb learns more about his ability, himself, his therapist—who seems to know a lot more than she lets on—and just how dangerous being an Atypical can be. 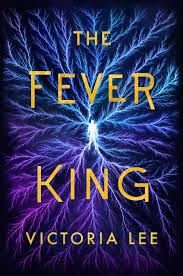 The Fever King by Victoria Lee

“But you think that I can’t see, what kind of man that you are
If you’re a man at all
Well, I will figure this one out, on my own”

In the former United States, sixteen-year-old Noam Álvaro wakes up in a hospital bed, the sole survivor of the viral magic that killed his family and made him a technopath. His ability to control technology attracts the attention of the minister of defense and thrusts him into the magical elite of the nation of Carolinia.

The son of undocumented immigrants, Noam has spent his life fighting for the rights of refugees fleeing magical outbreaks—refugees Carolinia routinely deports with vicious efficiency. Sensing a way to make change, Noam accepts the minister’s offer to teach him the science behind his magic, secretly planning to use it against the government. But then he meets the minister’s son—cruel, dangerous, and achingly beautiful—and the way forward becomes less clear.

Caught between his purpose and his heart, Noam must decide who he can trust and how far he’s willing to go in pursuit of the greater good. 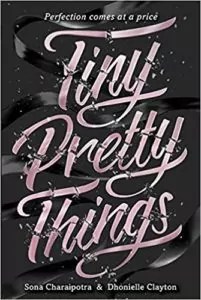 “It was never my intention to brag
To steal it all away from you now
But God, does it feel so good”

Black Swan meets Pretty Little Liars in this soapy, drama-packed novel featuring diverse characters who will do anything to be the prima at their elite ballet school.

From the New York Times-bestselling author of The Belles, Dhonielle Clayton, and the author of the highly anticipated Symptoms of a Heartbreak, Sona Charaipotra.

Gigi, Bette, and June, three top students at an exclusive Manhattan ballet school, have seen their fair share of drama. Free-spirited new girl Gigi just wants to dance—but the very act might kill her. Privileged New Yorker Bette’s desire to escape the shadow of her ballet-star sister brings out a dangerous edge in her. And perfectionist June needs to land a lead role this year or her controlling mother will put an end to her dancing dreams forever.

When every dancer is both friend and foe, the girls will sacrifice, manipulate, and backstab to be the best of the best.