Win 1 of 3 copies of The Darkening by Sunya Mara

Following daughter of failed revolutionaries, Vesper Vale, as she sets out to save her father from the same deadly fate as her mother by cheating her way into prince’s elite squad of soldier-sorcerers and his cold heart, Sunya Mara’s epic fantasy debut, The Darkening, is a gripping must read for the summer. To celebrate its release, we’re so excited to be giving three readers the chance to add it to their bookshelves!

Vesper Vale is the daughter of revolutionaries. Failed revolutionaries. When her mother was caught by the queen’s soldiers, they gave her a choice: death by the hangman’s axe, or death by the Storm that surrounds the city and curses anyone it touches. She chose the Storm. And when the queen’s soldiers—led by a paranoid prince—catch up to Vesper’s father after twelve years on the run, Vesper will do whatever it takes to save him from sharing that fate.

Even arm herself with her father’s book of dangerous experimental magic.

Even infiltrate the prince’s elite squad of soldier-sorcerers.

Even cheat her way into his cold heart.

But when Vesper learns that there’s more to the story of her mother’s death, she’ll have to make a choice if she wants to save her city: trust the devious prince with her family’s secrets, or follow her mother’s footsteps into the Storm.

To enter to win a copy of The Darkening by Sunya Mara, follow the instructions in the tweet below! 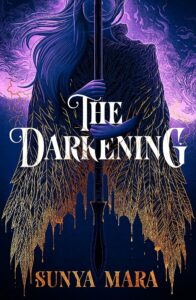 Get your copy of The Darkening by Sunya Mara here.

Terms and Conditions
1. No purchase necessary. A purchase will not increase your chances of winning.
2. This giveaway is open to residents of the United Kingdom only.
3. This giveaway opens Tuesday, 12th July at 19:30 and closes on Tuesday, 26th July at 21:00
4. Three (3) winners will be selected at random from all applicable entries. The prize consists of one (1) copy of The Darkening by Sunya Mara. Prize has no cash value and no alternative prize is available.
5. Winners will be contacted via Twitter direct message by @unitedbypop after the giveaway closes. Winners must provide United By Pop and Hodder & Stoughton with their full name and mailing address to receive their prize. If winner fails to do so within 24 hours of being contacted, winner forfeits their prize and a new winner will be selected.
6. United By Pop is not responsible for prizes that are lost or damaged in the post. Prizes may take up to 90 days to arrive.

Ella McLeod on forcing readers to radically imagine the protagonist in Rapunzella, Or Don’t Touch My Hair