"Like the Darling children’s and Brody’s adventures, escaping into stories won’t ward off any real-life challenges –but perhaps it can leave us feeling a little more prepared to face them."

Going back to childhood favourites can be something of a risk. They can bring back the joy and wonder our younger selves felt while reading or watching them, or leave us cringing at what we now see is bigoted, sexist or just poor material. Rereading Peter Pan – my favourite book when I was five years old – always evokes mixed reactions for me. I still adore the story and JM Barrie’s obvious appreciation for children and the way they see the world… not so keen on the racist elements, or the fact that poor Wendy ends up cooking and cleaning for the Lost Boys rather than having any fun of her own.

Though it’s less problematic, another aspect that stood out to me while reading the book a few years ago is that the Darling children are still quite young when they’re deemed too grown-up to return to Neverland. John forgets about Peter less than a year after their adventures together, and seems to evolve from a ten-year-old boy into a “bearded man” with the speed of a Pokémon. Wendy returns to Neverland a couple of times to do Peter’s spring cleaning (…seriously?!) but soon decides that she’s ready to grow up. Not surprising, given that her childhood seems to have consisted mostly of housework.

On a metaphorical level, this makes sense: Neverland represents the imagination, the type of childlike innocence that allows for belief in such places at all. That is something that obviously does change as children get older. But on a more literal level, to me it seems a shame that – rather like Susan Pevensie is banished from Narnia once she develops an interest in boys and makeup –this escape to fantasy is ripped away from the characters right as they reach their teenage years, at a time when life presents a new batch of challenges.

To be fair to JM Barrie, he was writing at a time when the concept of adolescence didn’t exist in the same way it does now. The idea of a transitional period between childhood and adulthood began to develop in the early 20th century. The word ‘teenager’ didn’t come into common usage until around the 40s, decades after the initial publication of Peter and Wendy. Personally, though, I feel I needed escapism as much as a teenager as I did as a child –probably even more so.

My finished copies of LAST BUS TO EVERLAND arrived yesterday so I had to take a photo* of it with its sibling. *Technically more like 100 photos, it was quite the shoot. #LastBustoEverland #OutoftheBlue #yabooks #lgbtbooks

In my second young adult novel, Last Bus to Everland, I wanted to offer this sort of fantastical getaway to older characters who are dealing with some of the issues that teenagers face today. The book tells the story of Brody, a 15-year-old boy from Edinburgh who is introduced to a magical, ever-changing world where time doesn’t pass and no one can die, but which he can access only at 11.21pm every Thursday. It’s a double retelling of sorts, based on an Edinburgh folktale named ‘The Fairy Boy of Leith’ and taking –as the title suggests –a large pinch of inspiration from JM Barrie’s magical world.

Brody’s Everland provides not a permanent escape, but a temporary respite to help him and his friends deal with the pressures of the modern world. Brody is being bullied, feels inadequate compared to his genius older brother, and his dad is severely agoraphobic. Other characters are young carers, coping with mental illness, or struggling with school or careers. The majority of them, like Brody, are LGBTQ+. Everland serves to help them through their problems, but they’re eventually forced to choose between this fantasy world and the real one; between growing up, like Wendy, or remaining Peter Pans forever.

There may not be any real Neverlands or Everlands out there for teenagers to fly off to (as far as I know, at least) but escapism is still important. Being a teenager has always had its challenges, but I’d argue that in the UK and various other countries, young people have more on their plates today than in previous generations. The internet has created social issues that didn’t exist twenty years ago, academic pressure is increasingly intense, and many areas have suffered cuts to youth services. Let down by politicians, some teens are also being left to fight for causes such as climate action and gun control. It’s not surprising that mental health issues in young people are rising.

Escapism can’t be a cure for any of that, but in moderation and in healthy forms (books, games, fanfiction…) it can help relieve stress. When it comes to reading, however, the word sometimes has a disparaging edge to it. There’s an idea that past a certain age, reading has to serve an intellectual purpose or it’s worthless –a standard that isn’t applied to most other forms of media. I always find it disappointing to hear adults criticise teenagers for reading books aimed at younger children, or dismiss certain genres of fiction as being less worthy than others. Combined with an academic focus on ‘challenging’ books, I’m sure this attitude puts some young people off reading all together.

We need to encourage teenagers’ access to books, through supporting schools and libraries, but also their choices of reading material. Challenging books that question the status quo are crucial, but there’s also a great deal of value in reading that is just fun and easy and nostalgic, especially when it’s providing a much-needed break from other pressures. Like the Darling children’s and Brody’s adventures, escaping into stories won’t ward off any real-life challenges –but perhaps it can leave us feeling a little more prepared to face them.

Last Bus to Everland by Sophie Cameron is out now in the UK and available to pre-order in the US. 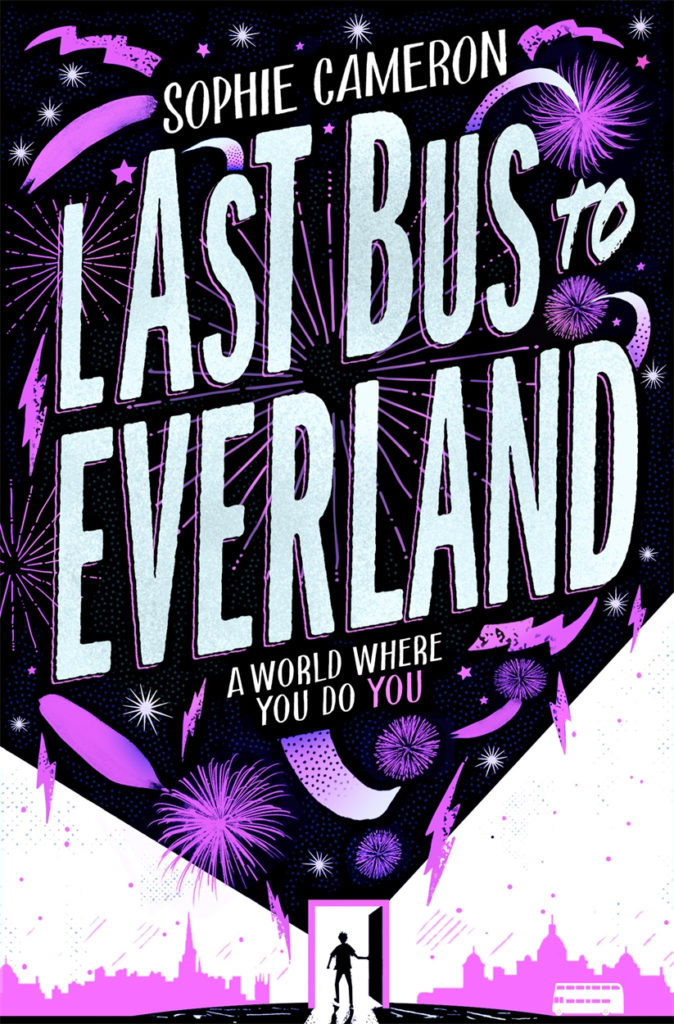