Joan He is back and this year she’s blessing our shelves with Strike the Zither, the first book in what’s set to be an epic new YA fantasy series inspired by one of the Four Classics of Chinese Literature, Three Kingdoms. With rivalries, found family, war, magic and featuring stunning illustrations by Kuri Huang , Strike the Zither is a must for your autumn TBR and we’re so excited to be able to share an exclusive extract prior to its October 2022 release.

“I remember the day I stopped searching for Ku. It was the end of a long winter.

The snow was melting, puddles forming in the streets. A retinue of warriors rode past, their stallions splashing bystanders, their bodies flashing with weapons, shields, armor—all except for one. That person rode at the front. She wore white
flowing robes and carried a strange instrument, a fan, and nothing else.
Strategist, the people whispered.
It was the first and last time I saw her.

The next day, I was wandering, lost and hungry, when the sound of music wafted from a tavern. I peeked in and there, by a table, sat a wiry man with a permanent frown carved into his face.  But the music he played! His instrument. It had a name. Zither. The man did too.

Cicada asked me why I chose this path. I offered a suitable explanation. I spared her the story of the pitiful twelve-year-old orphan who stood outside the tavern as the man played the very instrument of the strategist leading all those warriors. The man glanced up, saw me staring. His frown deepened. To him, I was just another dirty urchin.

I almost turned away.

But then a gentle breeze blew in from behind, and despite all the things I didn’t know, I did know one: Spring was in the air.
Better times were coming.
I just had to believe in myself.”

The year is 414 of the Xin Dynasty, and chaos abounds. A puppet empress is on the throne. The realm has fractured into three factions and three warlordesses hoping to claim the continent for themselves.

But Zephyr knows it’s no contest.

Orphaned at a young age, Zephyr took control of her fate by becoming the best strategist of the land and serving under Xin Ren, a warlordess whose loyalty to the empress is double-edged—while Ren’s honor draws Zephyr to her cause, it also jeopardizes their survival in a war where one must betray or be betrayed. When Zephyr is forced to infiltrate an enemy camp to keep Ren’s followers from being slaughtered, she encounters the enigmatic Crow, an opposing strategist who is finally her match. But there are more enemies than one—and not all of them are human. 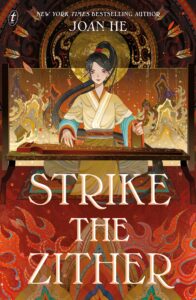 Get your copy of Strike the Zither by Joan He here.