“Compromise, and sacrifice when appropriate, and boundaries are important.”

When a book is pitched as a ‘Simon vs. the Homo Sapiens Agenda meets Clueless boy-meets-boy spin on Grease‘ you know you’re in for a treat and Sophie Gonzales’ gorgeous new YA contemporary, Only Most Devastated, delivers on all fronts. It’s honest, funny, heart warming and hopeful, plus its subtle nods to everyones favourite musical are ingenious (we all love a good Hopelessly Devoted to You easter egg?)

With candid and sensitively explored discussions on sexuality, grief and body acceptance, Only Most Devastated is a must read for all readers looking for a YA contemporary that will make your heart swell and break in equal measures. Which is why we feel very lucky to have got the chance to chat to Sophie all about her wonderful new book.

How and when did you come up with the idea for Only Most Devastated?

My agent and I were chatting back in 2017 about how little queer representation there was as recently as the ‘90s and early 2000s, and then the topic turned to how some of those classic rom-coms might look different through a modern, queer lens—and Grease was one of the movies that came up, along with that classic, well-loved trope of “two people meet, fall in love, and then are thrown together unexpectedly”. My agent latched onto the idea of a book using that premise as a jumping-off point, and wouldn’t let me forget it until I sat down and wrote the thing!

What inspired you to reimagine the musical Grease?

I suppose the answer to the idea behind OMD, and this, are one and the same. I didn’t set out to do a retelling, however—more an homage to the most indulgent, clichéd tropes I could think of, as I refuse to accept them as overdone until everyone’s had a chance to see themselves on the page experiencing them – the dramatic grand romantic gesture, the bitchy girl with a heart of gold, and a blow-up fight at the school dance to name a few!

If you were to reimagine another musical, which would you choose and why?

The first thing that comes to mind is Dear Evan Hanson—please hire me and let me make it gay for you, producers! Everyone* thought it was queer for a while there on Twitter anyway!

*By everyone, I mean, I’ve seen about three people tweet that they assumed it was queer before they saw it. But that’s three whole individual people!

I loved the parallels between Grease and Only Mostly Devastated. They were so cleverly written! How did you go about deciding which elements of the movie to incorporate into your own story?

I was careful to put in little details as homages, rather than copying blatant plot-points. Names were left alone (although there are little nods, for example, Juliette is a French name), and the exact story beats were left alone, but I wanted to keep similar themes, just updated. So, I kept the discussion of how much you need to change yourself for a partner, and adjusted the moral a little so the message was more clearly “compromise, and sacrifice when appropriate, and boundaries are important”. I did have fun putting in Easter Egg details, though (for example, the chord progression for Those Magic Changes appears in-text, but blink-and-you’ll-miss-it).

Only Mostly Devastated superbly covers topics such as grief, sexuality. Was there anything in particular that inspired you to explore this throughout the novel?

Whenever you’re writing a queer novel, sexuality is going to be explored to some extent! And as for grief, it started with me adding a family illness in as the reason for Ollie’s cross-country move, and as I was writing it I realised I wanted to get heavy with it and explore death and grief, and make sure the plotline was given space and the respect it deserved. As a psychologist, I’m particularly aware of how grief affects many teenagers, and often for the first time, and how profoundly it can rock you. I wanted to take the opportunity to explore different reactions to grief, to demonstrate that there is no “normal” or “correct” way to respond to it—it’s a highly individual experience, and it doesn’t come with a manual.

Only Mostly Devastated features many beautifully written but incredibly emotional scenes (as well as some brilliantly funny and adorable ones!) Were there any scenes in particular you found difficult to write and, on the flip side, any moments you especially enjoyed writing?

Thank you! I absolutely adore writing arguments (what does that say about me?), as I write them once I get to a place where I partially agree with both characters. Letting them butt heads with their opposing viewpoints is so much fun for me, as the retorts pop into my head without me having to think it through, almost like the characters are in my head yelling at each other and I’m frantically transcribing. I found the basketball scene an absolute pain to write, as I hate sports, and have never focussed during a game in my life. I leaned heavily on my basketball-obsessed partner for that scene.

It’s definitely something I will continue to explore. My own weight has gone up and down over the last few years, and I’ve struggled a lot with what healthy looks like for me, and accepting that healthy and thin are not the same word. They can co-exist, but they are not synonyms. The more we normalise the vast array of body types that exist in real life, the better for everyone. In my next book, my MC is roughly the same size I was in high-school: straight-sized, but enough above Hollywood’s idea of average that she’s hyper aware of it. When I was a teenager, plus-sized rep was nowhere to be found, but the same went for this rep. As an adult, I’ve read exactly one young-adult book that featured an MC who didn’t neatly fit into “skinny” or “fat”. I’m happy to be in the position to add to the collection.

The cast of characters in Only Most Devastated are wonderful and so loveable. Is there a character you relate to the most or one you had the most fun creating?

I relate to all of them in various ways, but Lara was definitely the most fun to create! There’s a real freedom in writing a girl who’s angry, and short. Women are so rarely allowed to be rude and unlikable. Lara says, go ahead, dislike me if you want to, I won’t lose sleep over it. She couldn’t be further from me, and there was such a freedom in writing that.

Do you have any future projects in the works and if so, can you give us any hints as to what they might be?

My next book comes out in March 2021, and it has a title but we haven’t announced it yet! It follows a bisexual girl named Darcy who gives out anonymous relationship advice via an abandoned locker at school. When she is caught by one of the seniors at her school, he hires her as his personal relationship coach. The goal? Help him win his ex-girlfriend back.

Finally, I have to ask, how many times have you watched Grease whilst for Only Mostly Devastated research?

Enough times that I know most of it off by heart! And not just Grease the movie, but also Grease Live, and the Grease Musical (which I saw in full two times while writing Only Mostly Devastated, due to a stroke of luck!).

Get your copy of Only Most Devastated by Sophie Gonzales in the UK & US. 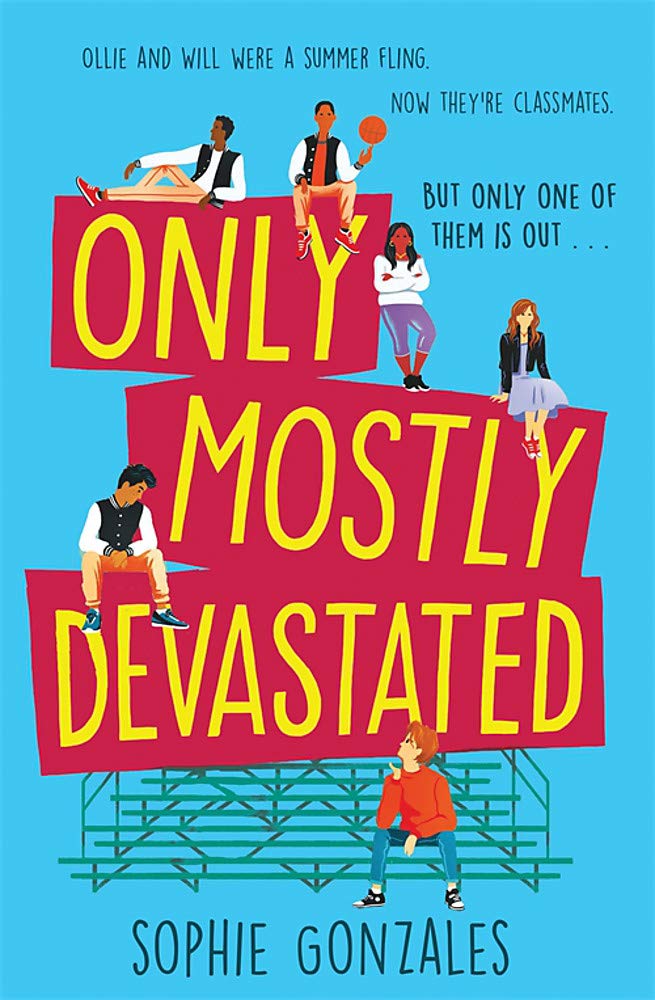